Today, we are launching a new campaign urging people living in Southwark who have received an invite for a free NHS lung health check, to prioritise their health and book an appointment. The lung health check is being rolled out across areas in Southwark for the first time, to help people who are most at risk of developing lung cancer and other respiratory conditions get diagnosed early.

Residents in Southwark who are aged 55 to 74 and registered as a current or former smoker with their GP, are being invited for a lung health check. The check can detect lung cancer before symptoms appear, allowing doctors time to treat patients early on, when the chances of survival are higher.

The lung health check forms part of the new NHS Targeted Lung Health Check (TLHC) programme, which was first piloted in 2019, across parts of Manchester.

In partnership with Guy’s and St Thomas’ NHS Foundation Trust, we began piloting the TLHC programme last month, with plans to extend to other parts of south east London next year.

So far, over 3,000 people living in Southwark have received an invited in the post, encouraging them to book an initial nurse led assessment, which will explore chest symptoms and risk of lung cancer and other respiratory conditions.

From today (14th November), residents who would benefit from having an additional face-to-face examination will have the opportunity to receive a CT scan of their lungs on a community van, at the Asda Superstore in Old Kent Road.

To coincide with the launch of the community van, we have launched an eye-catching advertising campaign with optical illusion imagery, to drive home the message that it’s not only our eyes that can trick us – so can our lungs, with some people potentially having an undetected lung condition, despite feeling fine. 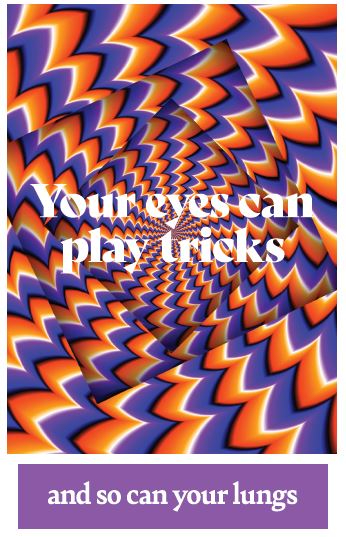 Lung cancer is one of the most common cancers in the UK but if diagnosed early, the treatment is more likely to be successful. However, a recent YouGov survey revealed that current smokers are less likely than never smokers to believe that detecting cancer in its early stages improves the chances of treatment being a success.

The campaign therefore presents an opportunity to change public perceptions around early diagnosis and encourage people who have received an invite for a NHS lung health check, to prioritise their health and book an appointment.

The Lung Health Check campaign will include:

How can I support the campaign?

Visit www.sel-lunghealthcheck.nhs.uk to find out if you should receive an invite.