The South East London Cancer Alliance is relaunching the “Do It For Yourself” lung cancer awareness campaign this week to encourage people to not dismiss a cough of three weeks or more as being COVID-19 and to contact their GP.

The campaign - which will run from 7th November to 2nd December 2022 - was initially rolled out across south east London during the summer of 2021, as part of a joint awareness campaign with biopharmaceutical company MSD and 8 national Cancer Alliances.

The relaunch of the “Do It For Yourself” campaign comes after recent figures suggest people at risk of lung cancer may ignore the symptoms and not come forward for care, despite it being the biggest cause of cancer deaths in England.

The campaign coincides with Lung Cancer Awareness Month and will include out of home advertising campaign in pubs, pharmacies and on BT kiosks across south east London.

Why are we relaunching the campaign in south east London?

Like many Cancer Alliances in England, we noticed a decline in the number of lung cancer referrals across south east London following the outbreak of coronavirus in 2020.

The symptom crossover between COVID-19 and lung cancer (which includes a persistent cough), along with concerns about being exposed to the virus and not wanting to be a burden on the NHS, meant many people with possible symptoms of lung cancer were not speaking to their GP.

Although the number of people coming forward to see their GP has risen since the start of the pandemic, we want to highlight the importance of acting upon symptoms that could be suggestive of a serious lung condition, and not dismissing them, which is often the case with lung cancer.

We also want to raise awareness of lung cancer symptoms after a recent survey commissioned by the NHS revealed that less than two thirds (57%) of the public recognised a cough for more than three weeks or as a possible symptom of lung cancer and almost a quarter of respondents (24%) said they would do nothing or wait if they had this symptom.

In south east London, the majority of lung cancers are diagnosed at a later stage but if we can detect the cancer early on, the treatment is more likely to be successful.

Who is the campaign aimed at?

Lung cancer can affect people of all ages, but the risk increases as you get older.

The “Do It For Yourself” campaign targets men and women over the age of 50 as lung cancer most commonly affects people of this age group. It is therefore important that we ensure people in this age group are aware of what symptoms they should be looking out for.

In addition to the symptom of a cough for three weeks or more lung cancer can also present the following symptoms:

The creative for the campaign is built around the image of a paint tin, to highlight that we should prioritise our health and not “gloss over it.” 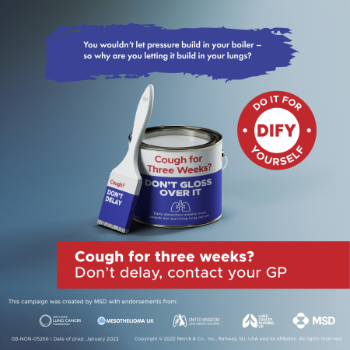 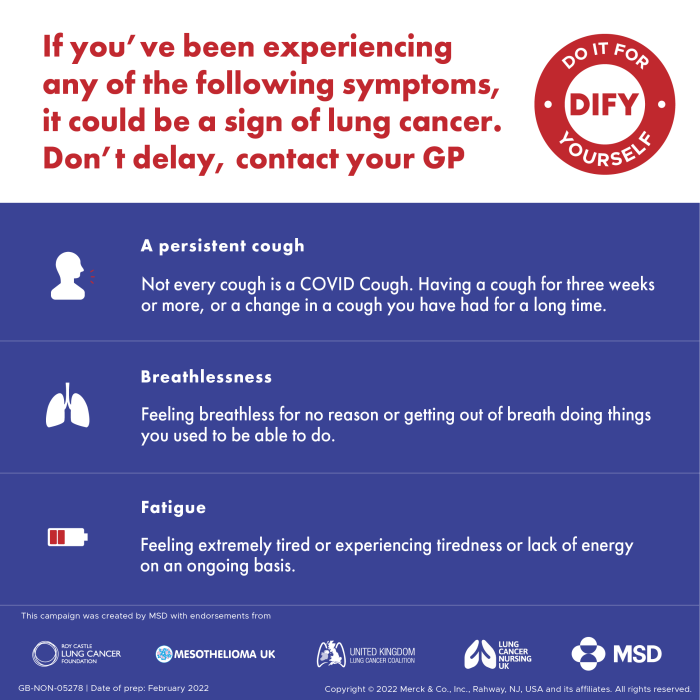 How can I support the campaign? 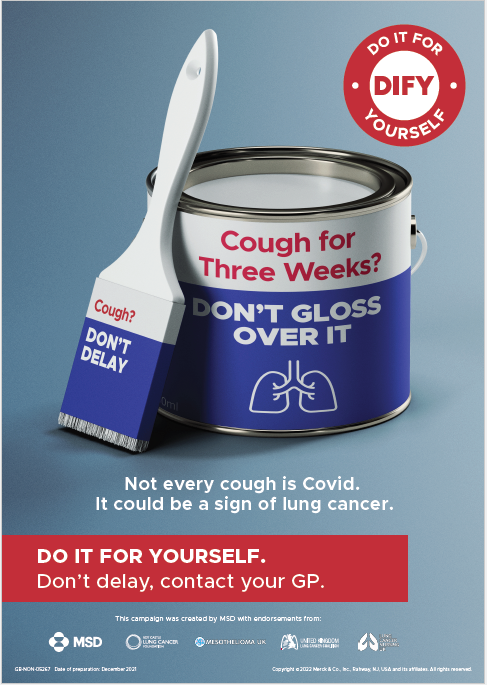